The Polish Product of the Future was created with us! 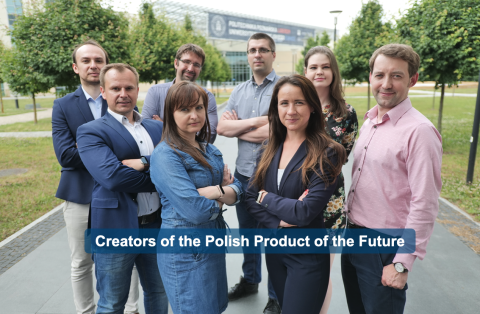 The AutoMedPrint project, implemented by the team led by prof. Filip Górski from the Faculty of Mechanical Engineering won the main prize in the Polish Product of the Future competition!

The prototype AutoMedPrint system developed at the Poznan University of Technology is used for the fast, automatic design and production of prostheses and limb orthoses, mainly for children, using 3D printing. In a team consisting of mechanical engineers and biomedical engineers working closely with specialists in the field of medicine, a system was designed. The system allows one to deliver a functional prosthesis or orthosis even on the second day after taking the measurement. It is done with the use of a 3D scanner on a specially designed stand. This makes a huge difference in the case of pediatric patients - mostly children with amputations and birth defects since they do not use prostheses due to their high cost and uncomfortable, problematic production processes.

You can read more about the project HERE.

You can see the film about the project HERE.

This year, 163 innovative projects developed by Polish companies and scientists were submitted to the competition. The highest number of applications, as many as 139, were submitted by entrepreneurs.

Projects submitted to the competition were assessed by industry experts and the jury, which included representatives of the Chancellery of the President of the Republic of Poland, the Chancellery of the Prime Minister, the Ministry of Development, Labour and Technology, the Ministry of Education and Science, the Patent Office, the Polish Development Fund, the Industrial Development Agency, the Federation of Associations Scientific and Technical - the Supreme Technical Organization, the Warsaw University of Technology, the University of Warsaw as well as the National Center for Research and Development and the Polish Agency for Enterprise Development.

The winners were granted the right to use the title and logo of the Polish Product of the Future. In addition to promotional benefits, the winners received a financial award - winners of the main prize - PLN 100,000 each and the distinction award – PLN 25,000.

The competition is co-financed by the EU from the Smart Growth Operational Programme as part of project 2.4.1 Analysis and pilot centre of new instruments - INNO LAB.